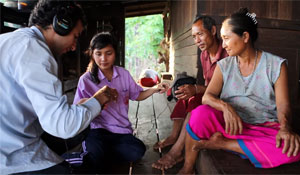 As an artist, you draw upon a creative well filled with images, sounds, and ideas gleaned from your daily life. Every artist has felt the well run dry and had to spend time rejuvenating or seeking out new inspirations to fill it. Consciousness-Based℠ Film Education helps you extend that well, tapping into an inexhaustible ocean of creativity within yourself—pure consciousness.

David calls this “catching the big fish.” The deeper you go into that infinite ocean, the bigger the fish you can find, giving you greater understanding of life. Free from negative and stressful constraints, you create with more happiness and energy. The colors of city streets are more vivid, and your senses are razor sharp—you’re more empowered as an artist. As a conscious filmmaker you can communicate universal truths of human life through even the simplest expressions.

The Signal and the Noise

Think of your brain as an incredibly sophisticated radio. It receives many signals from the outside, and also sends out its own signals. The creative impulse underlies all these signals, often hidden by the static between them. This creates confusion. If there isn’t clarity in your awareness, you can’t tune in properly to any particular station.

How to Amplify the Signal

Consciousness-Based Education gives you the chance to dive deep into the clear, silent pool of your awareness via the Transcendental Meditation® (TM) technique. When you come back into activity you have more clarity and are better able to tune in to the radio station of your choice. It’s a very concrete experience, and lays the groundwork for the creative experience in the studio and classroom.

You do not have to do anything special to become more creative. You don’t have to struggle or go through dark nights of the soul. All you have to do is get rid of the “stuff” (stress, unruly emotions, and noisy thoughts) that hide your creativity.

The founder of Maharishi University of Management was Maharishi Mahesh Yogi, the well-known founder of the TM technique. His message was that the purpose of life is the expansion of happiness, and that every human being can effortlessly unfold his or her infinite potential.

Source: Maharishi Mahesh Yogi, “Art and the Artist”, [A lecture given at Kossen, W. Germany]. In M. Cain, Art and the Science of Creative Intelligence: Interdependence of Part and Whole, 1970, pp. vii-viii.

“Intuition is seeing the solution–seeing it, knowing it. It’s emotion and intellect going together. That’s essential for the filmmaker… Personally, I think intuition can be sharpened and expanded through meditation, diving into the Self.”

“Meditation is not a selfish thing. Even though you’re diving in and experiencing the Self, you’re not closing yourself off from the world. You’re strengthening yourself, so that you can be more effective when you go back out into the world. It’s like they say on airplanes: ‘First put your mask on, and then help those next to you put theirs on.’ “