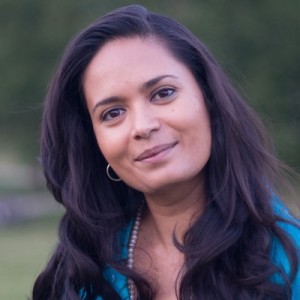 Sasha Kamini Parmasad ​(MFA, Columbia University) is an award-winning poet and fiction writer and author of the poetry collection ​No Poem​ (Yuganta Press). She began publicly and professionally engaging the space of Consciousness and Culture at age six, performing songs and poetry on a national scale in her native Trinidad and Tobago as well as in New Delhi, India. Sasha’s childhood poetry was published in Equality​ ​(All India Democratic Women’s Association Journal) and was awarded first place in national competitions in Trinidad and Tobago. A collection of her childhood poetry, ​Poems of a Girl Child​, will be published in 2020.

As an adult, Sasha continues to engage the space of Consciousness and Culture as an educator, peace activist/meditation teacher, visual artist, and writer. ​Her first novel,​ ​Ink and Sugar​,​ placed third in the United States in the First Words Literary Contest for South Asian Writers, ​while her poetry placed first in the annual Poetry International Competition and has appeared in a variety of online and print publications in the US, India, and the Caribbean, including​ Muse India, Indivisible: An Anthology of Contemporary South Asian American Poetry​,​ ​and ​Modern English Poetry by Younger Indians​. Working as a community activist in Queens, NYC, Sasha co-edited the chapbook Bolo Bahen! Speak Sister!​, which emerged out of an Arts & Empowerment Program co-sponsored by Sakhi for South Asian Women and Jahajee Sisters; this publication gives voice to immigrant experiences of domestic violence in Queens.

Sasha’s other projec​ts include screenplays for two short independent films,​ Land of Nothing​ ​(director, Amine Kouider) and ​Navaswan: A Tale of Self, Loss, and Love (director and cowriter, Marc Baraka Strauch), and essays on Consciousness and Culture, which have been published on the Transcendental Meditation for Women website, as well as presented at Matwaala (South Asian Diaspora Poets’ Collective) Festivals in 2015 and 2017, and at the Indenture Abolition Centenary Conference at the University of London in 2017. Over the years, Sasha has designed curricula, taught academic writing, creative writing, and multi-arts courses, and led meditation/personal development projects in programs at Columbia University and UN Women, in leadership/government circles in the US, in underserved communities (NYC, Chicago, Washington DC), and internationally. With more than twenty years of meditation experience, ​she has worked as a Specialist Transcendental Meditation Teacher and a Director of Special Projects with the David Lynch Foundation (NYC) and is currently an Adjunct Professor of Creative Writing at Maharishi International University in Iowa.

Each of us is a unique world, a uni(solo)-verse in and of ourselves. As a teacher, I guide my students to excavate the multidimensional/multifaceted aspects of their “uni-verse,” and bring this vision and voice to the fore in their creative work. I believe that writing is a powerful act of seeing that engenders personal transformation, so I also challenge my students to discover and rediscover the details of their unique and ever-shifting point of view. These are the things that bring breath and blood to a story, that give it a 3D presence in the world.

Though I primarily teach fiction, which was the focus of my MFA in Creative Writing, I have published more work as a poet and essayist since childhood. I have also professionally engaged the performance arts since my early years and am a practicing visual artist. This diverse background informs my current teaching pedagogy, which emphasizes an inclusive approach: I guide students to develop their skills in traditional fictional forms but also facilitate their work with hybrid/experimental and multi-genre forms.

Finally, I believe that writing is a craft that can be taught and learned with love. As Maya Angelou humorously pointed out, being a “natural writer” is “right after being a natural heart surgeon.” In both of these areas, the student succeeds by loving the learning and practicing of craft diligently while receiving honest, constructive, and individualized feedback. I feel very strongly about giving this type of feedback to my students, having had the experience of being taught and mentored by excellent teachers and writers such as Jim Shepard, Maureen Howard, Honor Moore, Alan Ziegler and others. The love must not be left out of the process of teaching or writing. As Alan Zieglar stated in an ATW (Advice to Writers) Interview, “Write because you love writing, even if you don’t always like what you have written.”

“The peace and understanding I find through the page, although derived from my own mingle with writing, became justified or worthy in my eyes during Sasha’s class. I think that’s the most precious gift you can give anyone. The notion that they are special, that their voice matters and is heard.” —Samantha Young

“Sasha’s class was one of my favorites of all the classes I’ve ever taken. I’m actually proud of the work I did in there, and I was excited to go everyday. Sasha could see the core of what each person was trying to communicate.” —Nick Tucco

“Dear Sasha, as a helper in the process of discovering the amazing world, I appreciate your hard work and patience.” —Mengyuan (Angela) Wang

“I noticed how well Sasha Parmasad tailored the class for each student based on his/her/their unique style of writing. In large part, she was able to do this because of her wonderful heart—it nourished the curriculum in such a way that the mundane became fulfilling, the boring, relevant.” —Michael Fitzgerald

“Different in the most amusing, compassionate, and brilliant way, Sasha Parmasad reaches into the writings of all of her students and connects us to a more permanent part of who we truly are. Sasha exposes us to the life force captured by the words we all choose to use in moments when we give ourselves the freedom to.” —Crystal Waters