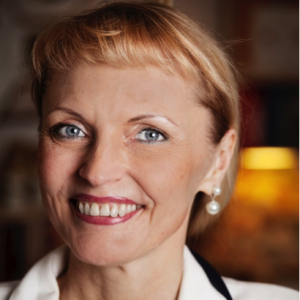 Charlotte Bech graduated as a medical doctor from the University of Copenhagen. She has worked as a surgeon in Gentofte Amtssygehus in gastrointestinal surgery, and as a medical doctor in the area of hematology at the most renowned referral hospital in Denmark (Rigshospitalet), and in the field of internal medicine/obstetrics in Tennessee, in the USA.

She has taught at a medical school in Copenhagen for several years. She is currently running a private clinic in Copenhagen, Denmark, supplementing modern medicine with Maharishi Ayurveda, and has given more than 30,000 ayurvedic consultations. She writes as a columnist in several national magazines and is the author of several books on topics of ayurveda. She is a presenter to the government in Denmark and has been selected as the foremost representative of ayurveda from Denmark to India where she has collaborated with the Ministry of Foreign Affairs. She is Vice President for the European Ayurveda Medical Association (EURAMA) and has been awarded the PANACEA international excellence award from Vanaushadhi Vidyapeetha, International Conference on Ayurveda and Holistic Healing, from Government of Maharastra, India.

Charlotte teaches courses for other medical doctors on Maharishi Ayurveda. She holds the degree Doctor of the Science of Creative Intelligence and has taught the Transcendental Meditation® technique to almost 1,200 people.