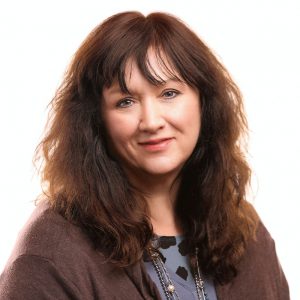 Dorothy Rompalske is the author of a number of feature film screenplays including Passing, Falling Off Cloud Nine and Pilgrimage. Her credits also include the drama Good Fortune (Producer/Director/Writer), which aired on the A&E Cable Network; as writer, the feature documentary Cinema Combat: Hollywood Goes to War, for the AMC network; the episode Quitting Cold, for the NYC–based television series Here is New York (winner of a NY Emmy for screenwriting); DNA: The Next Generation, for the Human Genome Project and PBS; and most recently, the documentary Reflections on Media Ethics.

Professor Rompalske first taught screenwriting at MIU in 2014, before joining the faculty full-time in 2015 as an Associate Professor and the Academic Director of the David Lynch Graduate School of Cinematic Arts. She was asked to start an MFA in screenwriting soon after, and she now serves as the Director of that program.

Previously, Rompalske taught screenwriting and directing in the Film Department at Brooklyn College, City University of New York. She has also worked as a script doctor and story analyst for private clients and several major film companies, including Universal Pictures. She began her writing career at the acclaimed Chapel Hill Newspaper (Chapel Hill, North Carolina) and has served as a Contributing Editor for Biography magazine. Her feature articles and profiles have been syndicated in publications worldwide by the New York Times Syndication Services.

Originally from New York City, Rompalske attended the Journalism School at the University of North Carolina at Chapel Hill, and received her MFA from the Film School at New York University’s Tisch School of the Arts, where she was named a Louis B. Mayer Fellow, A Mobile Awards finalist, and Best Director of her graduating class. She has served on the Board of Directors New York Women in Film & Television and is the former Executive Director of Women in Film and Television International.