MIU student Sam Bozzo received his BFA in film from the ArtCenter College of Design in Pasadena, California and attended the UCLA Professional Screenwriting program. Over the past 20 years he has had a prolific career as a video producer, director, editor, and motion graphic designer working in many industries, including advertising, education, and entertainment. He has also written dozens of screenplays, and his short films were screened at the Sundance and Toronto Film Festivals.

In 2003 Sam was writing a sequel to the science fiction classic The Man Who Fell to Earth, which starred David Bowie as an extraterrestrial whose world is running out of water. During his research Sam came across the book Blue Gold, which examines the privatization of the world’s dwindling water supply. He was so shocked by the serious environmental, health, and political issues surrounding water that he decided to make a documentary about it. Released in 2009, Blue Gold: World Water Wars has won numerous awards, including Best Environmental Documentary at the Vancouver International Film Festival.

Sam came to MIU because, as a fan of David Lynch, he heard about the new MFA in film. “It’s a unique program,” he said. “No school has done a collaborative web-TV series like this.” Sam has written TV pilots before, but enjoys the challenge of creating the series together with his fellow classmates.

Sam also learned about the Transcendental Meditation program through David Lynch and thought it would benefit him. “There is a lot of stress in this industry,” he said. “TM is really helping me with clarity and focusing on the creativity, not the stress.”

During the making of his documentary, Sam learned the ins and outs of international film distribution and began the arduous process of producing, directing, and distributing his own narrative features, including a science fiction TV pilot about water shortage on Earth. Even though it can take up to seven years to make a movie, it is now possible for an independent filmmaker to work outside the Hollywood studio system and share his work with people around the world. 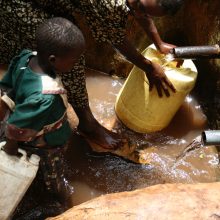 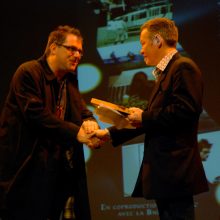